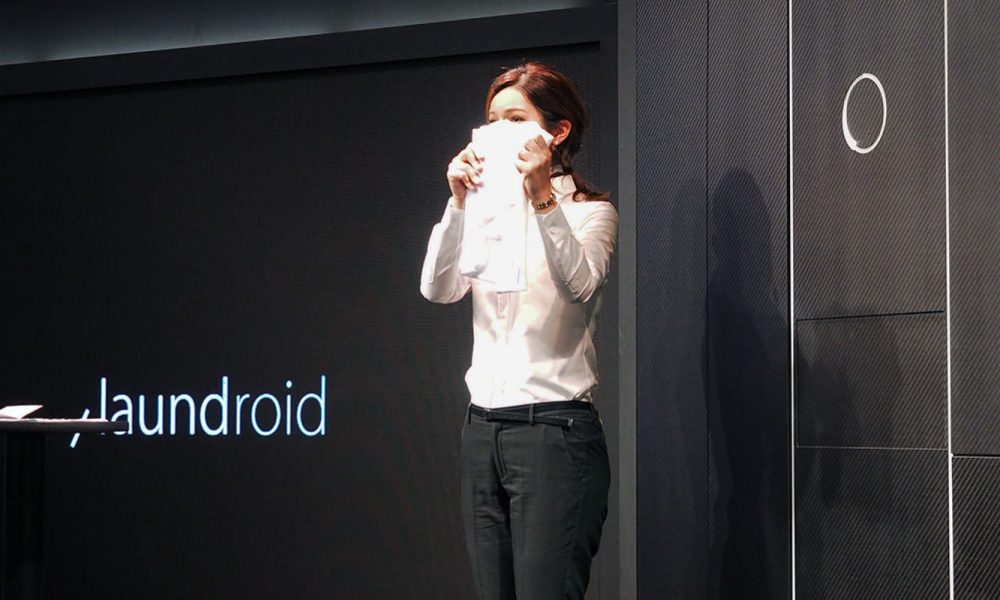 After the washing machine and clothes dryer, the year of 2016 finally introduces the world’s first laundry-folding appliance known as Laundroid. Firstly revealed at the Consumer Electronics Show in Las Vegas and Createc Japan in Tokyo this year, the appliance which is roughly the size of a standard refrigerator, has created quite a stir, though not all remarks were positive.

The machine takes up to 4 minutes and 30 seconds to fold a T-shirt, which was for some, not impressive enough. Despite that, Seven Dreamers has still managed to secure a funding of 6 billion yen (around US$60 million) from SBI Investment, in addition to Panasonic and Daiwa House. However, the shareholding ratios and payment date remain undisclosed. Besides, this is only a trial manufacture and the developers are optimistic that the machine’s overall performance can be enhanced through continued modifications and refinements of the robotics functionality.

To date, Laundroid can distinguish four categories of laundry (shirt, pants, skirts and towels). The process is simple and one just has to pull out the drawer at the bottom to throw the crumpled clothes in. Then, the image recognition algorithms will identify the type of clothing it is handling as each item is moved up to the shelves and folded appropriately. The whole operation combines clothing analysis, artificial intelligence (AI), and robotics blend together, as well as a period of 10 years to produce this fully automatic clothes folding machine.

Laundroid is also able to constantly learn and improve its performance as the appliance is connected to the data from the loT network which will be transferred to Seven Dreamers original server which will research on the collective data to provide better customer service. With Laundroid, Seven Dreamers said that an average person can save the 9000 hours which are used to fold their laundry. That is 367 days which can be used for other productive activities, such as binge-watching Netflix with family or friends or cultivate a hobby.

According to the Founder and CEO of Seven Dreamers, Shin Sakane, the reason behind the creation of Laundroid was based on a comment by his wife. As well as the idea to create something never seen before, to be producers of “Things not already in this world”. Apart from Laundroid, the company has two other products which are Nastent, a nasal strip for less snoring sleep and a carbon golf shaft.

However, as much as eliminating one of the tedious chores of mankind can be a great idea, the amount of space needed for Laundroid along with a likely plus-size price tag means that the robot probably won’t be a common fixture in most homes in the years to come. On the other hand, Laundroid might have more of a future for businesses that need to fold a ton of stuff, such as a clothing store, hotel or nursing care facilities.

Seven Dreamers plans to begin Laundroid sales by reservation for their first machine “Laundroid 1” in March 2017.

For more information, please visit https://sevendreamers.com/en/ or take a look at the demonstation of Laundroid via https://youtu.be/FzZSpiqvb1Q