Byju’s Rises to US$5.5 Billion Valuation, Connecting the World of Education Technology 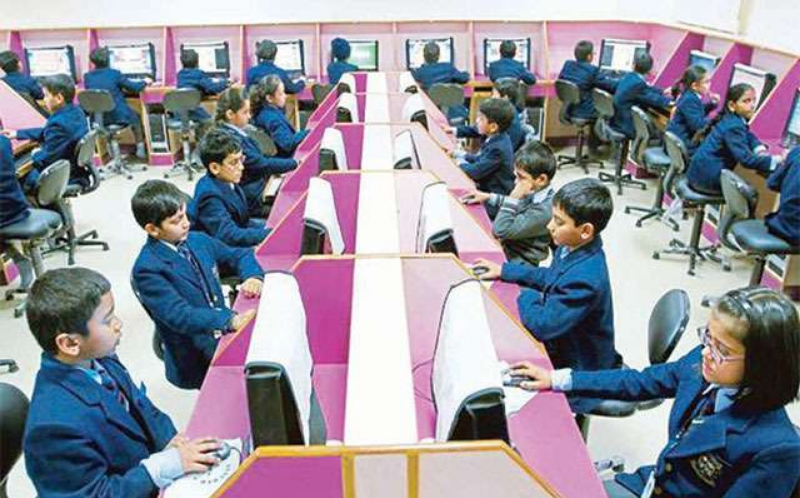 From wired-up mannequins acting as tutors to virtual and augmented reality in educational applications, technology is helping to revolutionize the way Indian schoolchildren are learning.

India’s most valued ed-tech company, Byju’s which counts Sequoia, Lightspeed, and Tencent among its backers have topped half of ten billion dollars in valuation with its ongoing Series F funding round that started in December 2018.

This new valuation reportedly at US$5.5 billion, almost doubling from its last valuation of US$3.5 billion. This development came after the startup raised US$86 million from new investors like Qatar Investment Authority (QIA), the sovereign wealth fund of the State of Qatar, and Owl Ventures, an ed-tech investor.

Funding capital from this new round would support the company’s aggressive plans for international market expansion and the creation of world-class learning products for students across the globe.

To date, the startup has raised ₹3,159.4 crore (about US$460.8 million) in the round, led by investors such as South Africa’s Naspers, private equity firm General Atlantic, and Canada Pension Plan Investment Board.

While this certainly is an unprecedented jump within a single round, the reason behind why many investors are clamoring for a piece of the education startup is largely due to it turning a profit and reporting huge rapid growth.

Bengaluru-based Think and Learn Pvt. Ltd., which runs Byju’s grew its revenue threefold in the year ending 31 March to a total of ₹1,430 crore (about US$208.5 million) and turned profitable on a full-year basis.

The firm explained that this was fuelled by a deeper penetration across India and a significant growth in the number of paid subscribers.

Byju’s is currently benefitting from Indian parents’ willingness to spend on education to give their children an edge. The startup has helped millions of students understand concepts in Maths, Science, and English.

In April 2019, Byju’s has reported over 35 million registered users and 2.4 million paid subscribers crossed Rs200 crore (about US$29.06 million) in monthly revenue.

“It is likely that it is commanding steep increases in valuation on a month-on-month basis, not year-on-year, as other startups might,” said Vivek Durai, the Founder of Paper.vc. “Among India’s unicorns, Byju’s has the highest leverage today vis-a-vis prospective investors.”

In India, there are an estimated 270 million children aged between five and 17. The country’s online education sector is projected to be the fastest-growing in the internet market, worth US$2 billion and become Asia’s third-largest economy by 2021, according to a study conducted by Google and KPMG.

Then again, the startup is not only looking at India with its aggressive expansion plan.

Byju’s to Replicate Successful India Model in the United States

According to investors, the edtech startup is also aggressively expanding its global footprint. First, entering into the United States market, as well as the launch of new course material for students in grades I-III have contributed to the valuation jump.

Besides, in January this year, Byju’s has also used US$120 million to acquire US-based Osmo, which provides a playful learning system, bringing physical toys into the digital world through augmented reality and its proprietary reflective artificial intelligence.

“This new acquisition will bolster team Byju’s international plans. With the integration of Osmo, Byju’s will also look to offer a unique, customized, engaging, and fun-learning solution for younger kids,” the startup had said.

Byju’s growth is expected to continue as it expands its learning programs for K-12 students and ventures into new markets.

“Given that in ed-tech there are not too many other large companies available to invest, Byju’s will attract a premium. There are other parameters such as customer acquisition costs, lifetime value of users, which is also much higher for Byju’s than other competitors,” said an investment banker.

But aside from the US, the edtech startup in February has also announced its intention to expand into the UK and Australia.

Then again, the most fundamental reason behind the startup’s success is that it provides a solution to the school-age population who faces fierce competition for university places.

16-year-old Akshat Mugad told Phys.org news, “I have been using Byju’s since last year and my performance has really improved. I understand mathematical concepts much better now.”

This is just one of the many students that have seen improvement from using the online learning site. The platform provides a fun and interactive way for students to learn differently from the rote memorization techniques that are used across much of Asia.

“When learning is a stressful process, it hampers motivation and a student’s quality of education. With gamification, personalization and positive messaging, learning is continuous, interactive and highly effective,” said Byju’s Chief Technology Officer Prakash Ramachandran.

The 4-year-old startup offers a learning app and platform that provides personalized learning programs for school students based on their proficiency levels and capabilities which help them learn at their own pace and style.

“There could still be more valuation jumps”, opined Santosh N., a senior advisor-valuation at Duff and Phelps, one of the largest valuation service providers in the world.

In many cases, investors are offered a different set of rights and conditions such as liquidation preference and anti-dilution protection.

“The amount that an investor pays for a stake in the startup or a new-age company could include an insurance premium for certain rights like liquidation preference and anti-dilution protection,” said Santosh.

The value of these rights could be as high as 20 percent of the total investment amount, and the remaining 80 percent is the value of pure equity.

Byju’s is already the most well-funded edu-tech player in the country, and experts say that the startup will most likely continue attracting a premium since there aren’t many other large companies in this space.

Byju’s is now aiming for a revenue target of over Rs 3,000 crore in the current fiscal, up from Rs 1,430 crore last year.