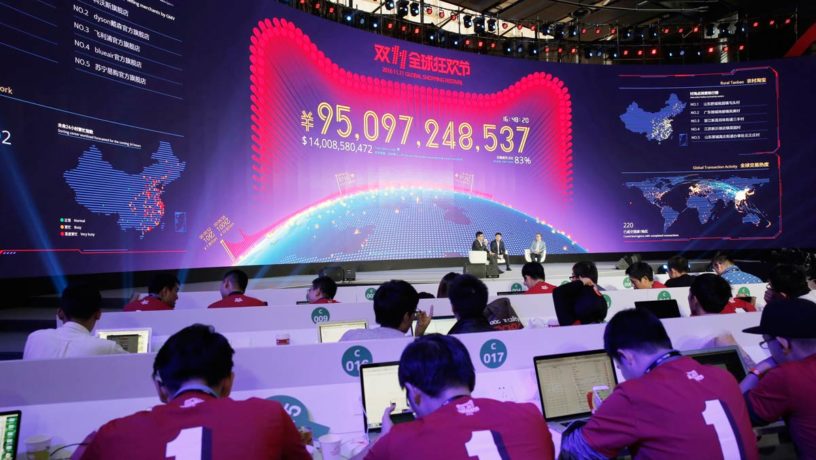 As Singles’ Day 11.11 approaches again, consumers are happily celebrating their singlehood with a discounted online shopping spree. But nobody is happier than online shopping retailers as they rake in big profit from this retail frenzy.

The event kicked off at midnight on Thursday 10th November, whereby with just 52 seconds into the day, the Chinese e-commerce giant has already made over US$ 146 million, according to Vulcan Post. And as the day ends, Alibaba has made a sales record of 121 billion yuan, that is about US$17.7 billion in this 24-hour time frame., which makes it the biggest e-commerce sales day of the year for Alibaba.

Comparing this to last year’s US$14.3 billion sales, 2016 has seen a rise of 32%. And placing it into perspective, the US$17.7 billion revenue is also three times more than Black Friday and Cyber Monday combined in 2015.

Despite that, what’s particularly interesting about the sale was that a high volume of purchase was conducted through mobile. As of 1.00pm in China, the mobile usage has represented 84 percent of all sales. While it is an entirely different story in the US shopping bonanza scene, as mobile usage is typically below 35 percent of the total sales.

On top of that, the online sales extravaganza has also seen the participation of about 14, 000 brands. But the best-selling products remains to be Apple Inc., Siemens, Uniqlo, Adidas, iPhones, Nike, and Haier.

Additionally, Alibaba has also been experimenting with new technology as it has allowed users to shop in virtual department stores like Macy’s. Though the concept is still new, but no doubt it will become a more prevalent and important medium for Alibaba as virtual reality and augmented reality gain a foothold among increasing numbers of consumers. VR could also help Alibaba broaden its reach into international markets.

But despite the extravagant event that Singles’ Day now emerge, the event prior to 2009, was only considered a day for singles in China to either celebrate in terms of rewarding and cherishing oneself or as a day to plan mixers to lose their unattached status. The date 11.11 (11th November) was chosen as the number 1 symbolizes a single individual.

The festival was reinvented in 2009 as Alibaba began promoting it as a day of which Chinese consumers should treat themselves to something nice. As a result, Alibaba was able to build momentum for Singles’ Day and turn it into a discount shopping event for everyone, calling the promotion “Double 11”.

“That resonated with people,” Jane Zhang, a principal analyst with Gartner’s personal technologies research team says, “Alibaba is sending a message to the people that we will give you more discounts, so you can treat yourself even better.'” And this can often lead to impulse purchase and overspending.

On the other side of things, however, it seems that not even the new heights of the Alibaba Singles’ Day sales can stop Alibaba Stock’s Trump problem as the company’s stock NYSE: BABA listed on the New York Stock Exchange has continued to plunge. Still, Alibaba’s stock dipped 1.4% on Friday, to $92.99, capping a three-day selloff that left the shares 7 percent lower. This is largely due to the concern that President-elect Donald Trump will follow through on his protectionist rhetoric against China.