Top 5 Startups in Singapore to Watch 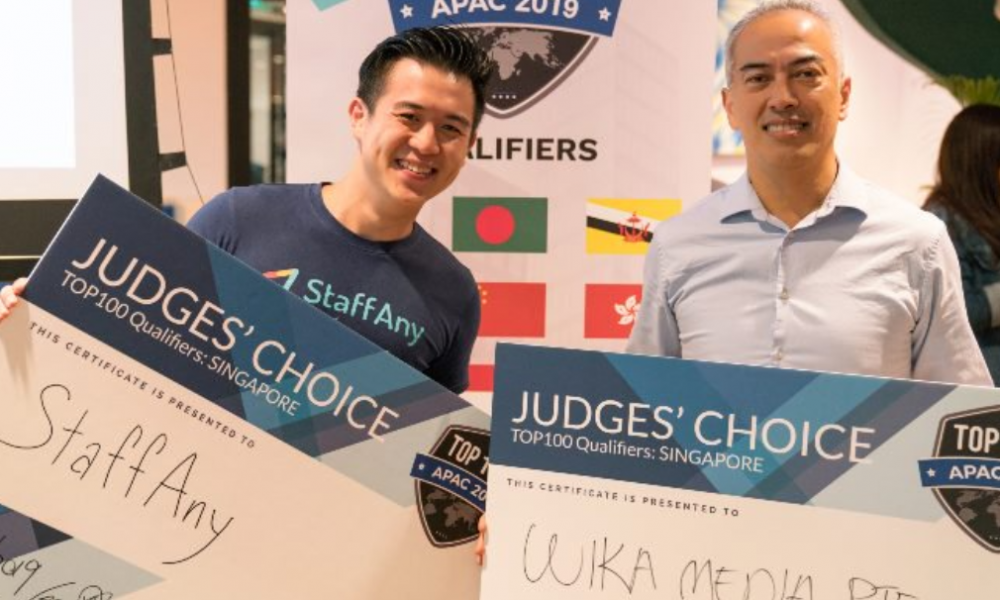 Singapore TOP100 winners were recently revealed and we took a chance to see who are these startups and which next big idea turns out to be the most promising.

On March 7th, 110 startups attended WeWork to join in the Echelon Asia Summit Singapore TOP100 competition where each startup had only three minutes to pitch their startup idea.

Judges who evaluated the startups included:

These panel of judges were tasked with selecting two winners who would be presented with a free booth at e27’s Echelon Asia Summit from May 23 to 24, 2019, as well as a chance to pitch for over S$100,000 worth of prizes.

As it turns out, Wika Media and StaffAny emerged victorious as the 2019 TOP100 winners for Singapore. So let’s dive and learn more about these two startups who’ve won the judges heart.

Wika Media is a startup that enables media companies to extend their reach by making their content understandable in more languages.

Roland Benzon and Vic Icasas, a studio owner and a software developer, are the two founders of Wika Media who built the startup to aid media companies in gaining and retaining viewers through destroying the language barrier.

The startup created hardwares that allows spoken, written, ane even signed communication to be calibrated according to user’s language preference.

For example, if you’re from Thailand and doesn’t understand English, you can still watch episodes of English shows and movies with synchronised Thai subtitles or dubbing.

Traditionally, these subtitles would have to be done manually and require a laborious amount of work and time. Now this is solved by three Wika Media products engineered to help fracture the language barrier:

It offers an app that guarantees both employee and employer increased accountability, control of the team on-the-go, and easy integration of schedules.

Since its inception in January 2018, StaffAny has experienced exponential growth in its deployment with a 25 percent growth every month. As of February 2019, the app has been deployed in 51 companies and has a projected 6x LTV:CAC ratio.

Moving forward, the company also sees itself as the future of work. The startup looks to provide solutions to problems like payday loans, shift-based hiring, performance-based resumes, part-timer insurance, and blockchain.

But aside from these two startups, there were three other startups from TOP100 Echelon that have caught our eye and they are:

Teaching coding knowledge through piracy and potatoes, Codomo is a creative startup that makes learning how to code interesting and exciting.

Their brainchild Potato Pirates is a strategic battle of potatoes and piracy game, which according to the startup could transform 10 hours of class time into 30 minutes of fun.

The team conducted coding quizzes pre- and post-game. Within 1 hour of the game, 92 percent of participants could understand and apply loops, while 74% could explain the concept of if-else and nested loops. Overall 9 in 10 players show improvement in their understanding of their fundamental coding concepts.

Looking at the industry, this fits into the trend whereby computer programming is becoming an essential skill as parents are jumping out of the curriculum and looking into fostering creative thinking and innovation for their children.

A startup that Shell selected as one of its top 5 IdeaRefinery Companies, Nodis is the creator of the world’s most advanced smart glass.

By doing so, occupants can control how much sunlight or heat they want to let into their office or room making living environments more suitable.

At the same time, users are also saving the world as the startup claims that it is able to reduce building CO2 and energy consumption by an average of 20 percent with sustainable design.

Deep learning is quickly becoming the standard in every industry, and Untangle questions why do models make a decision?

A deep learning platform to analyze other deep learning models, Untangle is solving the problems of understanding why AI models think the way they do.

The startup built a comprehensive platform and developer tools to allow companies to understand, modify, compress and explain their deep learning models.

This adds both transparency and alleviates huge problems for companies that limit wider adoption and trust of AI solutions, which is why we think it is imperative as AI is planting its root in every figment of the market.