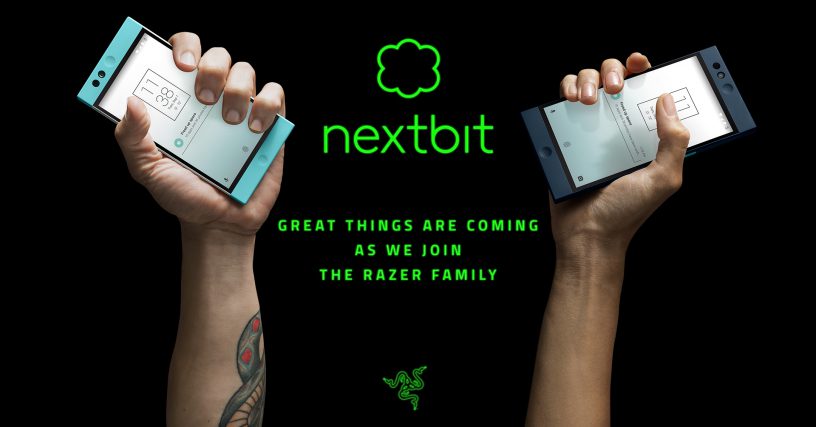 Razer, an American gaming company originally based in Singapore, has recently acquired the majority assets of Nextbit Systems Inc. in order to enter the smartphone industry.

Although financial details of the transaction, which has closed in January, were not disclosed, Razer has bought most of the assets of Nextbit and will bring the management and employees of Nextbit onboard.

“Nextbit is one of the most exciting companies in the mobile space,” says Razer’s co-founder and CEO Min-Liang Tan. “Razer has a track record of disrupting industries where our technology and ability to design and innovate have allowed us to dominate categories with longstanding incumbents.”

“With the talent that Nextbit brings to Razer,” Tan further adds, “We can look forward to unleashing more disruption and growing our business in new areas.”

Founded in 2013 by early Android Veterans Tom Moss and Mike Chan, Nextbit is the company that produces the Indie smartphone known as Robin. Built around a cloud-based platform, Robin specialises in the seamless integration of Android OS whereby it would automatically store data on the cloud.

Different from other third-party cloud services like G-Drive and OneDrive, Robin will store only the data which is not frequently used, while automatically placing it to the local storage once the data is being frequently accessed.

In September 2015, the company launched a Kickstarter and soon reached its US$500,000 goal, after which it announced the Robin cloud phone. In May 2016, the phone was launched in India at Rs 19,999 with 100GB cloud storage space.

Post-acquisition, Nextbit will operate as a standalone business unit under its own management and apart from the ongoing business of its parent company. Additionally, Nextbit will continue with product support and software updates for its Robin smartphone.

“In order to reach a wider audience and continue our mission, we decided to join with a larger brand,” says Tom Moss, the Co-founder and CEO of Nextbit. “We’re lucky to have found a company in Razer that shares our value of pushing the boundaries of what our devices can do.”

This also marks Razer’s second acquisition in three months, with audio legends THX, a company of whom they have held a long standing partnership with, joining the Razer family back in October last year.