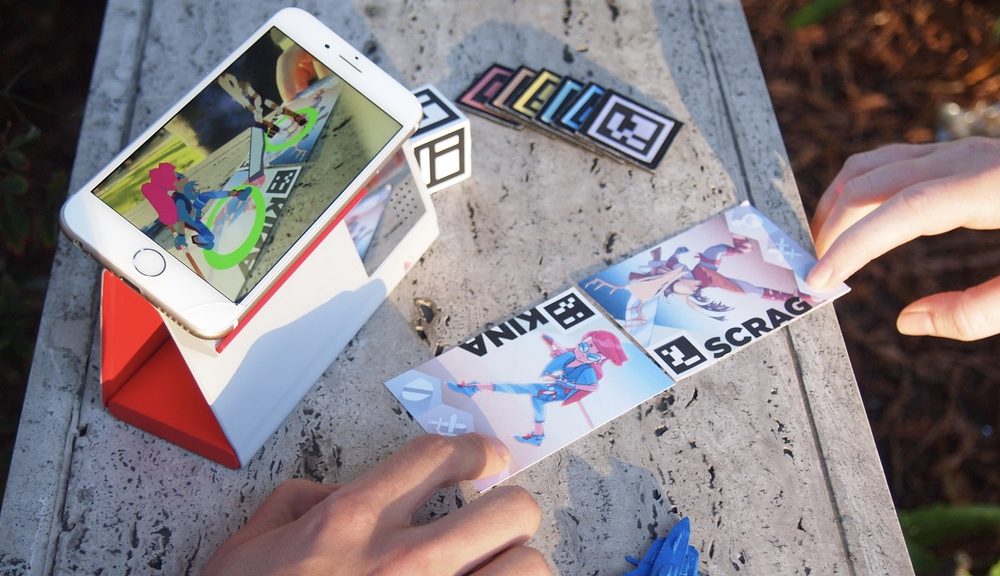 ToneTree is launching a Kickstarter crowdfunding campaign for its OAK augmented reality playground system. The ToneTree OAK dock is an Augmented Reality platform that can transform an iPhone into a table top playspace.

To work, the product brings together digital and physical toys to create an AR experience. Using it is simple, just place an iPhone on the OAK Dock, launch the OAK App, pick up an OAK Kit, and play.

OAK comes with a variety of kits that allows users to immerse themselves in AR experiences, whether it is flying through space, playing music or even to create a personal application. To date, there are four available OAK kits which are the Rockstar Kit, Explorer Kit, Gamer Kit and Developer Kit.

The Rockstar Kit allows the user to break into a jam session anywhere by simply placing the included pads down in front of OAK and play the instrument. While the Gamer Kit transforms the table into a battlefield as users can see their AR trading cards come to life as they place them in front of the OAK deck.

On the other hand, the Explorer Kit allows the user to drive their own toy spaceship to dodge asteroids and battle enemies as they explore the deep space. While the Developer Kit lets users create their own augmented reality apps.

Similar to the Osmo apps on the iPad, OAK uses patented computer vision technology to see and understand the space in front of your iPhone. The items included in the kits are called totems which are simple pads, cards, and plastic toys that OAK uses to control the virtual world. To detect movements, OAK also includes a laser in its base that detects when the user is interacting with totems.

Based in California, ToneTree is founded by Brian Cook, CEO; Ronald Sardarian, CTO; and Max Escaler, CMO from three different countries who roomed together at Rensselær Polytechnic Institute (RPI). Their idea – OAK came to life through an art project whereby the original idea was to turn the walls and floors of a building into an augmented reality musical instrument.

The team went through an accelerator program led by Intel Education. OAK will ship in August 2017.

For more information, please visit the OAK project at Kickstarter.