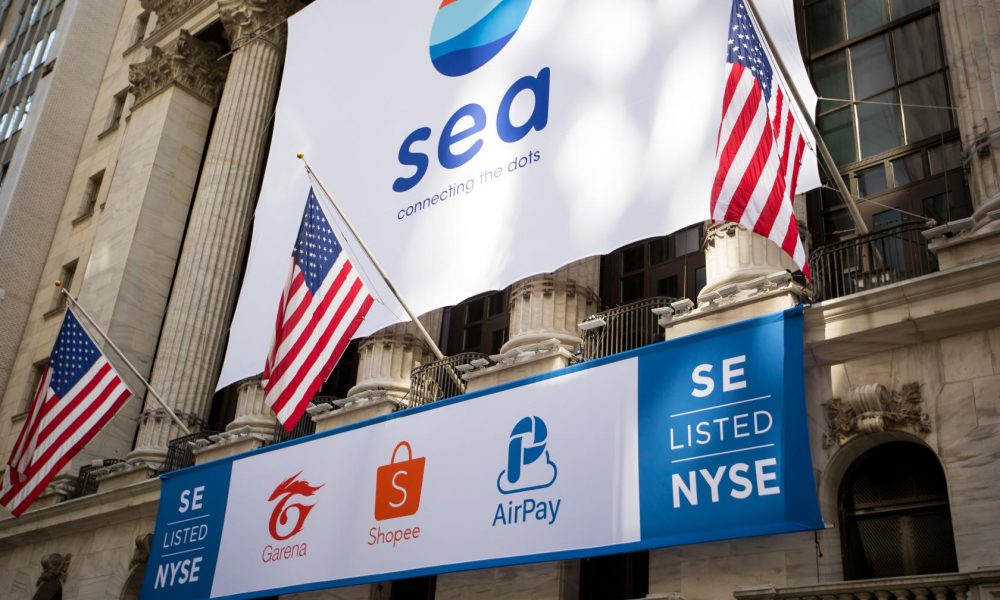 Sea Ltd, the gaming and e-commerce unicorn in Southeast Asia has been one of the biggest beneficiaries of the COVID-19 pandemic, reporting its total revenue of US$1.2 billion for the third quarter of 2020, with a 98.7% percent increase year-on-year.

Their Q3 figure revenue was boosted by the growth in digital entertainment and its eCommerce service Shopee and the sales of goods.

Listed on the New York stock exchange board, the Singapore-headquartered company has also seen its market capitalization more than quadrupled from the beginning of the year, topping US$80 billion and now being Southeast Asia’s largest listed company by market value.

In a mid-October report, Morgan Stanley had already made an optimistic forecast of Sea’s Q3 total revenue at US$1.47 billion, while Japanese investment bank Daiwa had forecasted a total revenue of US$1.16 billion for the firm in an August report.

In reality, Sea reported an EBITDA amount of US$120.4 million during the July-September period, which is its total adjusted earnings before interest, tax, depreciation, and amortization. This amount beat Morgan Stabley’s forecast of US$22 million and is a huge swing from the US$30.8 million loss in the quarter from last year.

For the first nine months of the year, Sea also posted total revenue of US$2.81 billion, and that is currently in line with the full-year total revenue forecasts from CGS-CIMB at US$3.96 billion while its highest forecast stands at US$5.38 billion from Morgan Stanley.

Sea benefits from the lifestyle and work changes that have been caused by the global COVID-19 pandemic and subsequent lockdowns. The period has seen an increase in demand for eCommerce, digital payments, and home entertainment which includes online gaming.

Unlike many industries, gaming is considered counter-cyclical, and an increase in the unemployment rate and lockdown has boosted the time for users to play online games.

For the digital entertainment segment, Sea’s games offerings and bookings climbed to US$944.7 million, which is a 109.5 percent increase year-on-year, while its revenue under generally accepted accounting principles (GAAP), came in at US$569 million, that is a year-on-year increase of 72.9 percent.

Currently, the digital entertainment division reported a revenue of US$1.32 billion for the nine-month period, and that compares with Daiwa’s full-year forecast for US$1.89 billion, Morgan Stanley’s US$2.85 billion, and DBS’ US$3 billion.

The unicorn’s quarterly paying users also more than doubled to 65.3 million, with an average number of bookings per user coming at US$1.7, as compared to US$1.40 last year.

One of Sea’s titles Free Fire was the highest-grossing mobile game in Latin America and Southeast Asia in the quarter.

On the other hand, Sea’s eCommerce division Shoppee has reported a GAAP revenue of US$618.7 million, which is a 173.3 percent increase year-on-year. This has way exceeded Daiwa’s revenue estimation of US$585 million and is close to Morgan Stanley’s projected revenue for the segment at US$617 million. As a whole, Sea’s eCommerce segment posted a nine-month revenue of US$1.12 billion.

There was also an increase in the adoption of Sea’s mobile wallet services in October with more than 30 percent of Shopee’s total gross orders paid using the service.

Sea said this signaled a strong growth in the SeaMoney division, with total payment volume topping US$2.1 billion and a totla of 17.8 million paying users in the quarter.

Despite that, the adjusted Ebidta loss for digital financial services has grown to US$149.26 million for the quarter, an increase from US$33.63 million in the same period from last year. Shopee however is looking to further increase this number as they offer users shipping incentives for using the e-wallet.

The same survey also states ShopeePay is Indonesia’s third most popular e-wallet. The Morgan Stanley report said it views the data as validation of its projection that Shopeepay was set to take around 20 percent of the country’s fintech market by 2025.

Despite this increase in revenue, the online gaming and eCommerce group also reports a net loss of US$425.3 million in the quarter, which is up from the US$206.1 million in the same period from last year due to heavy investments in the Southeast Asia market expansion

The company reported higher sales and marketing, administrative expenses, and an increase in the research and development budget. Other contributions also include higher interest expenses and foreign exchange.

For the full year, Sea remains optimistic, expecting its digital entertainment segment’s strong performance will continue. Sea’s chairman and group CEO Forrest Li told Nikkei Asia that, “we expect our very strong performance in the third quarter to sustain through the fourth quarter. ”

The company projects its digital entertainment bookings to exceed US$3.1 billion for the entire year, which would make it a 75% increase year-on-year, and also an increase from the previous guidance of US$1.9-2 billion.

For its eCommerce segment, Sea said it now expects GAAP revenue plus sales incentives net-off to top US$2.3 billion, which is a 144 percent year-on-year increase, and up from the previous guidance of US$1.7 to US$1.8 billion.

With the COVID-19 pandemic accelerating the adoption of digitalization in Southeast Asia as reported by Google-Temasek 2020 report, Sea is expected to be a big winner from this pandemic, and in the coming years ahead,