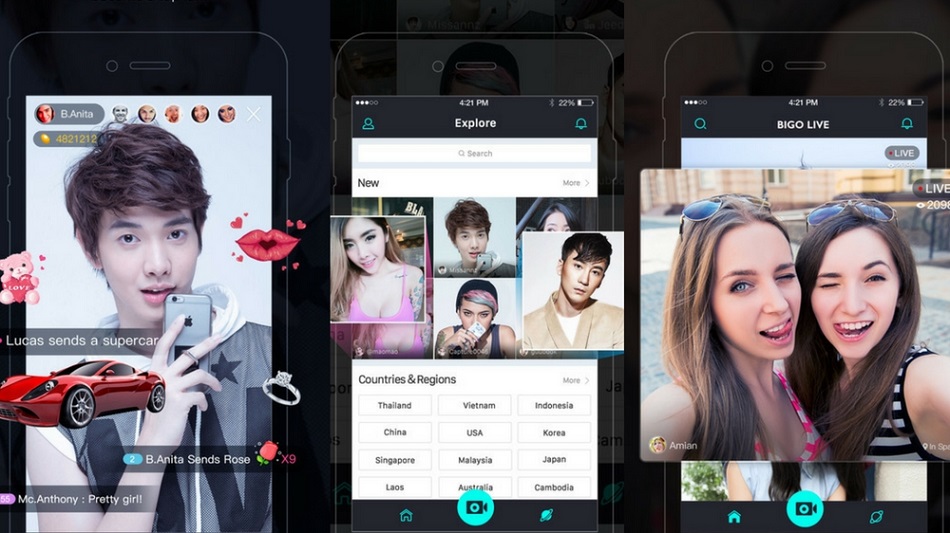 Singapore-based Bigo Live, a social video streaming app which allows users to broadcast videos, has recently closed its series C funding round led by China’s Ping An Overseas Holdings, an asset management unit of China’s Ping An Group which mainly engages in insurance and banking.

The financial terms of the round were not disclosed. But following this series C funding, the aggregated equity funding raised by Bigo Live will increase to US$180 million with a valuation exceeding US$400 million.

Known as a Periscope clone, Bigo Live allows its users to live stream anytime and anywhere, as well as to watch and follow other Bigo users.

According to a statement on its website, Bigo Live highlights: “We focus on video broadcast and VoIP-related product and services all over the world. Our leading mobile video broadcast product in Thailand – Bigo Live has attracted Thailand’s most active young & fashion people together to share their interests.”

The app also features game-like elements – providing users the ability to send digital gifts that can be bought using cash-purchased diamonds. These digital gifts range from tiaras to sports cars, which upon receiving can be converted to beans in exchange for more in-game diamonds or converted to real money.

Since its inception in March 2016, the app has gained a significant popularity among the 18 to 25 years age group. It has built a registered user base of 70 million globally, with an average use time of 40 minutes daily, while monthly active users have reached close to 30 million people.

Additionally, Bigo Live has also been ranked as a leading app on the Apple App Store and Google Play in Thailand, Vietnam, Indonesia, Singapore, Malaysia, and the Philippines several times.

Given this traction within Southeast Asia, the firm plans to expand its international footprint beyond Southeast Asia going up against it nearest comparable competitor Periscope, which is backed by NYSE-listed Twitter.

“To support its rapid growth, Bigo Live will continue to scout for great talents across nations and enable local expansions in Europe, United States, India, Russia, the Middle East and some other key countries,” Bigo Live says. The company will also continue to heavily invest in research and development projects to further improve the app.